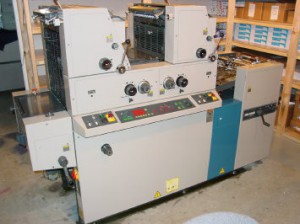 The Predicament Wrestling Scorebook was established in Marshalltown, Iowa, in 1980 and has been growing ever since.

When I first started coaching, there wasn’t a wrestling scorebook available that was big enough to record all of our dual meet and tournament matches in one season in one book OR that provided a summary form to keep track of each wrestler’s matches during the season. So I designed my own.

Other coaches saw it and wanted a copy, so I began publishing the Predicament Wrestling Scorebook. Back in the old days in the 50’s and 60’s, our current two point near fall was termed a “predicament” and that is where the name originated.

After I retired from teaching and coaching, I purchased a commercial, two color printing press, a digital plate maker, and paper cutter. So now I update, print, collate and bind the scorebooks myself each summer and then ship them out in the fall.

Many improvements in the book have come from coaches’ suggestions, so please contact me if I can improve this book for you in any way. In rewriting my instruction pages, I summarized and organized folkstyle wrestling basic rules into a simple explanation of our sport. I combined pieces here and there from other coaches and referees and wrestling rule interpreters. I hope you will copy whatever parts you want to provide an explanation of our sport to young wrestlers, parents, fans, student bodies, scorekeepers, youth tournament referees, cheerleaders, and news media. The more people know, the more they will enjoy, and the more popular our sport will become.

Like you, my passion is the sport of wrestling. I was one of you for 34 years. I have totally enjoyed our sport while competing,  teaching,  coaching and publishing this scorebook. And I have certainly enjoyed the many friendships and successes because of wrestling. I list the below credentials in the hope that you will trust that I know what I’m talking about, and that I am providing you with an excellent tool to help make your coaching job easier. I hope you will consider using our Predicament Wrestling Scorebooks for your team scoring and individual wrestler stats.

View the “Folkstyle Wrestling Rules” to test your knowledge of folkstyle wrestling.